Photo: Kastus Zhukouski with his family. Photo from the personal archive

A freelance journalist from Homiel Kastus Zhukouski spoke in public about the existence of threats to him and his family and asked for asylum in one of European states in January 2019. He refuses to tell the country of his present stay for security reasons.

‘According to my observations, the social standards are dozen times higher in Europe than in Belarus. It is total paradise for the people born here’, emotionally noted Mr.Zhukouski. ‘We haven’t participated in ‘funding the state expenses’ nor ‘took part in the national economic relations’ here. Nevertheless, a foreign country has provided us with the living conditions, quite a few Belarusians can only dream about’, he added.

The Zhukouskis don’t have any problems with living. They have been accommodated in a two-bedroom apartment with furniture. There are all necessary kitchen utensils in the dining room and there’s bed linen on the beds. ‘We even have and iron here’, Kastus said. The family gets EUR 130 a week for buying food. According to the Zhukouskis, it is more than enough. The foodstaff and especially the dairy products cost much less there than in Belarus. The utility costs are covered by the state.

‘I really saw hungry people in my native country, especially in the district centers. And it is impossible to imagine anyething like this over here. The people are well-fed and happy with life, they smile to each other. If I have the possibility to help the unfortunate people in my native country in the future, I will do it with great pleasure’, continued the journalist.

According to Mr. Zhukouski, his family’s application for asylum should be considered within half-a-year term. A free attorney is provided by the state, in order to prepare well for the interview.

‘We were worried for our underaged daughter at home all the time. The so-called ‘Russian world’ and KGB didn’t leave us alone. The oppressive actions became unprecedentally intense as soon as I told in public about a channel of illegal migration at the state border. I was arbitrarily sent to custody, fined, handcuffed to a tree, harrassed, and beaten even in a police department. I received repeated threats by e-mail.The keys to the house and some documents dissapeared. We didn’t wait for them to toss drugs and fled the country’, Mr. Zhukouski explained the reasons for leaving Belarus. 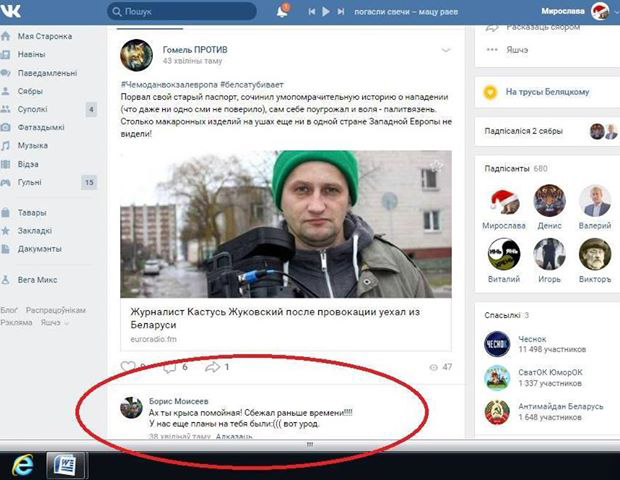 Kastus Zhukouski noted that he almost didn’t work physically at home, but felt tired all the time. ‘And I don’t sleep much here, but I feel great. We don’t worry any longer, and we’ve seized to be afraid of living!’, Mr. Zhukouski added.

It is known that a couple of dozen of police reports for ‘illegal production of media products for ‘Belsat’ TV channel without accreditation’ were composed in relation to Mr. Zhukouski in 2018. District courts imposed 16 huge fines on the freelance reporter for his professional journalistic activity and one fine for his contempt of court. The total sum of fines amounted to 12 432.5 Belarusian rubles that exceeded the average annual salary in Belarus. Three separate complaints on violation of his rights to peaceful assembly and free receipt and dissemination of information are being considered by the UN Committee on Human Rights at the present period of time.